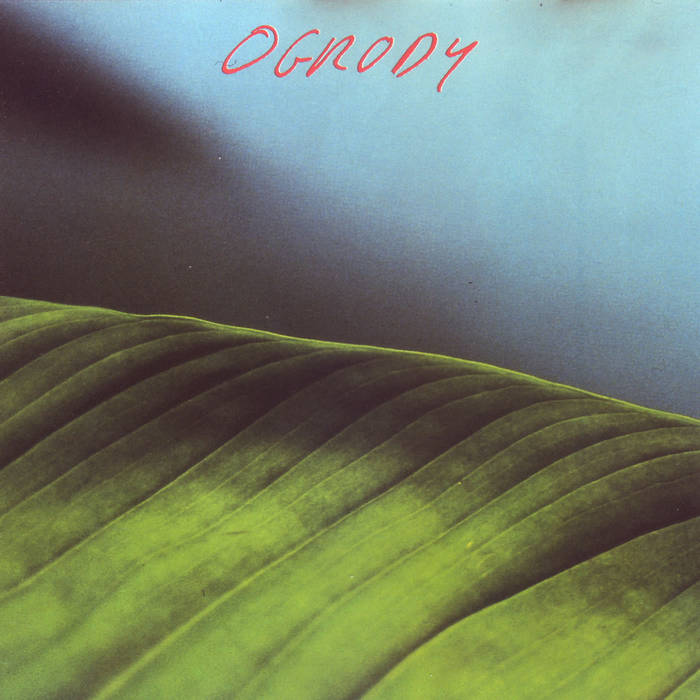 Miriam Christina Thank you for remastering and rereleasing Ogrody. Since it was one of my favourites since I heard it for the first time, I looked forward to listen to those fascinating reworks. Each one of it creates a different inner movie, a different mood. Brilliant work! Favorite track: Garten der Hoffnung (Ogrody-Rework).

1) Album-Version
Composed, performed and recorded by Marco Rosenkranz & Ecki Stieg at Jardin Studios, Hannover, August 8th, 1993 for the exhibition "Ogrody" by Jacques Gassmann.
The album-version was first released on CD in 1993. About 1000 copies were pressed and sold, deleted since 1995.
Original Linernotes:
Ogrody (polish: Garden) is the titel of an environment of fourteen dripping green paintings on a red silk wall, compressed by sounds and noises in an interactive process between the musicians and the painter.
The music on the CD was made for home listening and is called "Ogrody" because it was inspired by the paintings during the research on approaching the theme, performed by a singular interpretation.

2) Exhibition-Version
Composed, performed and recorded by Marco Rosenkranz & Ecki Stieg at Jardin Studios, Hannover, August 8th, 1993 for the exhibition "Ogrody" by Jacques Gassmann.
Reworked by Marco Rosenkranz in August 1993.
This version appeared on CD-R, embedded in slate in a limited wooden box with a small "Ogrody"-painting, sold only at the exhibition. Sold out in 1993.
This is not a remix, but a different version to the official album-version, using additional tracks, that were only used as a part of the multi-track audio installation.
The audio-installation itself contained three audio sources that were played simultaneously and varied in length, so that the soundscape was different every time.
The audio-installation ran permanently during the time of the exhibition at the Galery Schlehn in Empede (Germany) and was not switched off even by night.
It was a living, breathing organism - with a beginning and an end: After the end of the exhibition, both the visual installation and all the sound sources used there, were destroyed by the artists.


A note from Ecki Stieg:
Of all the music I've produced so far (okay, it wasn't that many) "Ogrody" is still the most important one to me, because it's the most emotional.
This includes the interaction of all artists as well as the learning process, the exhibition and the moment of making it.
It is the only music I was involved in, that I can listen to with the ears of a third person. And yet it is still very deep and personal.
I have decided to release this album again after a few decades, because I consider it timeless, without presumption.
Nevertheless, the time of making must not be ignored: Some critics thought they must draw parallels to Brian Eno's "Neroli".
In fact, Eno's album was released in the same year (1993), but reached us after our recordings.

A note from Marco Rosenkranz:
It was late at night. The last note had disappeared and Ecki and I knew that we created something special in this recording session.
The result was a breathing, living atmosphere. It encapsulated everything we felt during this holistic dialogue about art, nature, transendence and beauty.
This project was and still is a very personal, emotional, intimate, moving experience I'll never forget.
And when I listen to the work today it still feels alive and moving and I can hear that it's still breathing.

There were no restrictions for the reworks.
Neither stylistic nor lengthwise.
There was the option to mix, match or enrich one or both versions - or to use only single elements for something new.
When I came up with the idea for the reworks, I couldn't have imagined that it would develop so excitingly in so many ways.
Every artist approached the original from completely different angles and with completely different methods.
This says a lot about the piece itself, as well as about those who worked on it.
Thanx for your (re)work and creativity!
Ecki

A note from Adeptus Mechanicus:
I wanted to create somewhat of a haunting version of the original, which, I think, suits it very well.
I want to give you the feeling, that you are walking through a dead garden, in which dark entities are lurking around every corner, and can grab you and drag you to the darkest corners of hell.
adeptusmechanicus.bandcamp.com

A note from Waldrick:
Ogrody - the garden.
The garden is philosophical and biologically close-knit with life and transitoriness.
However, can one separate these both poles generally?
Is every life beginning not also at the same time transitoriness?
The life and the transitoriness is repetitiv, follows quite an own rhythm, does not make a distinction in well and nastily.
The magnitude is influenceable by care, the way not.
The life and the decay knows only one direction: forward.
How probably one feels in his very own garden of the life, is in the gardener's hand.
Does the technology developed by humans follow the example of life or even contradict it?
www.waldrick.de
waldrick.bandcamp.com

A note from Huron:
There's a garden... a garden of sounds.
Amidst this garden is a beautiful fountain, ancient and mysterious.
A fountain that makes you forget the time. It seems creepy.
I get involved.
It is these fine bell sounds that lure me into this garden and let me stay there.
In a seemingly inhuman world, which finds humanity and lets go.
For me it sounded like a quiet, breathing creature. just the whispering of the plants in this garden.
I wanted to breathe more life into this plant and put it in a vertebrae of beats.
huronidm.bandcamp.com
www.facebook.com/huron.idm/
www.facebook.com/bln.huron
www.last.fm/music/Huron

A note from Static Sky:
Improvised session with a dreadbox nyx, a novation peak and an elektron digitakt.
I cut a part out of the original "Exhibition-Version", filtered out the high frequencies a little bit and created a second variation of the sequence, which I let run 25 percent faster.
I put this one under the first part. After that, I cut individual samples from the whole, loaded them into my sampler and let it play these samples by random function. The sampler also controlled two synths, the small pad-fragments also by random function interspersed. I let the whole thing run at 50 bpm, because in the garden the time runs slower at night.
static-sky.bandcamp.com
www.facebook.com/staticskyribi

A note from George Kochbeck:
This is a reconstruction of the 1st third, based on an adaption of the original basic notes
Part a- 8x16 bars / 70 bpm
Part b- 8x 20 bars / 70 bpm
6 tracks played in realtime:
Contra bass
Cello
Glassharp
Flagolet-Violins
Reverse Piano
Ceramics
georgekochbeck.com

A note from Daniel Robert Lahey:
A solitary bird plies the musty currents.
She can see nowhere to land and must keep flying.
There are only grey shades below; little of the water or forests remain.
There is an insistent buzzing that she knows somehow is the new tune being hummed by the Earth.
A song of inevitable fury and of beauties lost; of mislaid trust.
suddenly, a garden…buzzing…

About the rework…
Ecki’s and Marco's music suits my tastes well because their deep (both in pitch and content) music leaves lots of room in the upper frequency registers for me!
I love it up there!
So, what i did was basically just sat down after a brief listen to Ogrody and jammed to what i could distinguish as sections using some of my favorite sounds and then spliced it all together.
I am not displeased with this, no, gentle listener, i am not displeased at all.
danielrobertlahey.bandcamp.com
cerebral.audio/product-category/artists/daniel-robert-lahey/

9) Hidden Track!
Buy the album and find out!